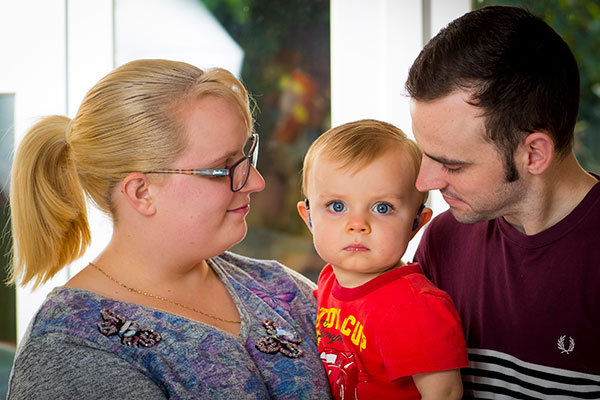 George King has never known anything but having hearing aids and he is rather adept at temporarily removing them when he wants to.

That said, George’s world would be a lot more silent and far harder for his parents Kirsty Steer and Nathan King to communicate with him, if it was not for the aids supplied by Kent Community Health NHS Trust’s Children’s Hearing Service.

Mum Kirsty had George at Pembury Hospital. She said: “It was a normal pregnancy and I had a natural birth, George weighed in at 8lbs 2oz so was a healthy weight. He was a little jaundiced so had to have some tests, but that cleared up.”

When George failed his newborn hearing test and others at Sittingbourne Memorial Hospital and the Heathside Centre in Coxheath, Maidstone, Kirsty and Nathan were told that George had hearing issues.

Kirsty, 30, said: “It was quite a shock but I wanted to stay strong. I had taken George to the appointment on my own and so phoned Nathan straightway to tell him. He was really supportive and said it will be ok.”

Aldi Assistant Store Manager Nathan, 27, said: “I didn’t want Kirsty to blame herself. I knew we could handle it together.”

The couple, who live in Sittingbourne, do a regular check to make sure the hearing aids, which George will have for the rest of his life, are working well.

“We had to pick the hearing aids for George and I wanted him to have some fun, cool ones. His favourite colour is blue, so he has blue hearing aids. They are perfect for him,” said Kirsty.

Sixteen-month-old George has moderate to severe hearing loss, but thanks to his aids, he can hear what is going on around him and take part. George also  has the Connexin 26 gene, which neither of his parents has.