How the Roger Pen has helped patients hear again 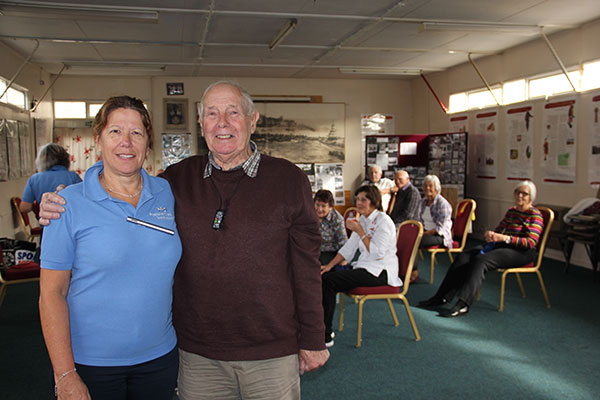 Listening to our patients is key. So when the Postural Stability Team within Kent Falls Prevention Service received feedback from patients that they’d struggled to hear the exercise instructions, the team knew they had to do something to help.

Senior Postural Stability Instructor Peter Ellis – who works for Kent Community Health NHS Foundation Trust – approached KCHFT’s Patient Engagement Team who conveniently were working with Action for Hearing to explore the use of Roger Pens within the trust. Peter offered to trial these pens at one of his classes.

The Roger Pen is a small portable device with a microphone that clips to the instructor and a receiver that is worn by the recipient. The hearing aid of the person is set to the hearing loop setting; those without a hearing loop can wear headphones.

And the trials could not have gone any better.

John Brown (83) from Margate attends a weekly exercise class in Broadstairs and found the Roger Pen was useful. He said: “I’m really deaf and my hearing aids are not that good so this Roger Pen has been very useful in class.”
Fellow attendee Margaret Mama agreed. She said: “I have lost three quarters of my hearing in both ears and even though I am wearing hearing aids, in a class like this, or when lots of people are talking such as in a restaurant, it’s very difficult to hear even the person next to you. The Roger Pen has made the instructor sound much clearer, it’s very good.”

Peter said: “Hearing problems can be a challenge for some patients so when you add in the additional noise and acoustics from a community hall, it can make hearing very difficult, and sometime non-existent, which is not ideal.
“When I set up one of my patients with the receiver and turned it on, I could see from his face how successful the Roger Pen was going to be. His face lit up.”

Engagement Manager Charlotte Wood who helped Peter source the Roger Pens said: “I am so excited we have started to use these Roger Pens. It’s a positive step in the right direction to help us communicate more clearly with hard of hearing patients and enable them to feel more involved, but to also support their understanding of care or treatment we are providing them.

“Feedback from the deaf community is that they are less conspicuous and very easy to use. The wireless microphone can either put on a table, held in the hand or clipped on to the speaker. What’s great is that you don’t have to be wearing a hearing aid and earphones can be provided as an alternative.”