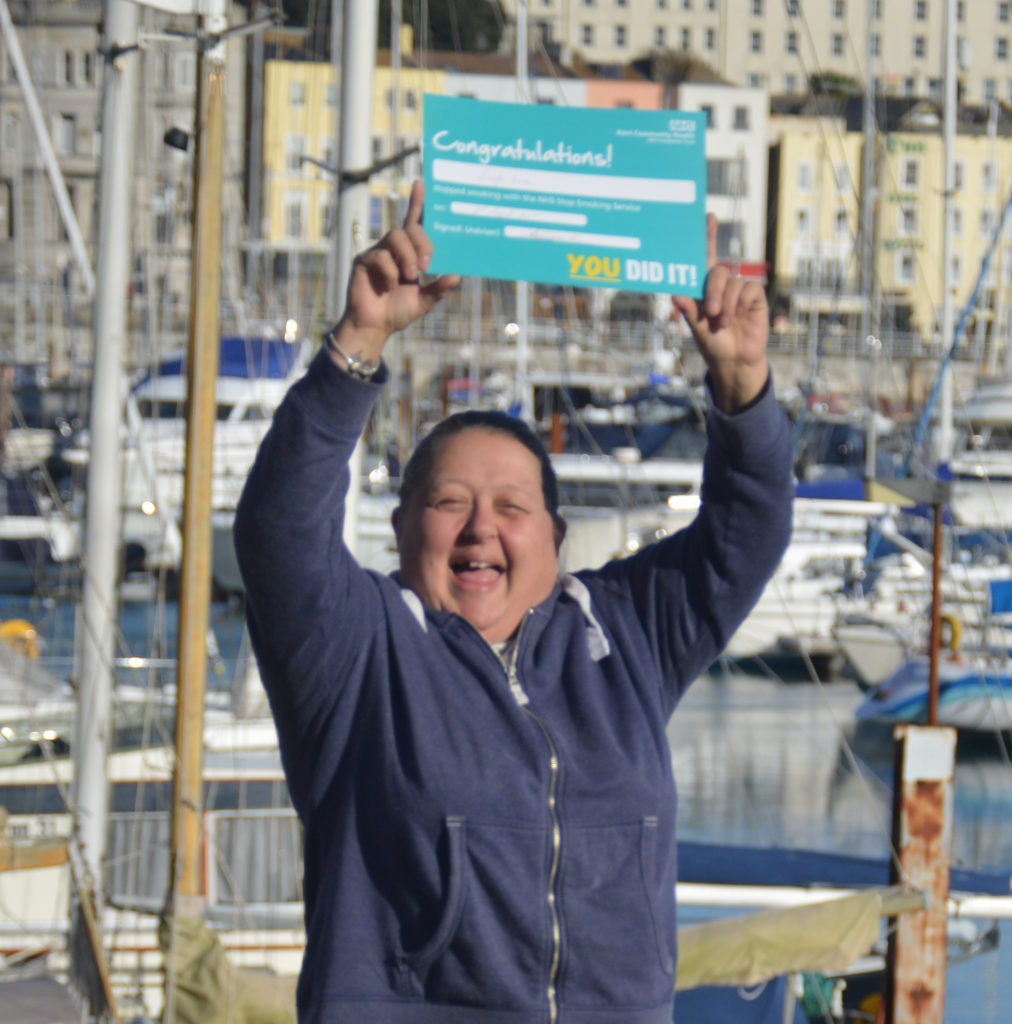 Ramsgate mum-of-one Leigh Love is feeling great after the One You Smokefree service in Thanet helped her to quit, after 36 years of being a smoker.

“I started smoking when I was 11,” explained Leigh, 47, from the cosy home she shares with husband Gary and teenage daughter Emma. “It was completely normal to smoke back then; both my parents smoked and if you didn’t smoke you were considered a bit weird. By the time I was an adult I was on 20-25 cigarettes a day.”

Leigh has Crohn’s disease, a chronic condition that affects the bowel, and she had an ileostomy (her colon removed) when she was just 25. “I often have to go to hospital for tests and checks ups, and every time I went they would say “are you still smoking? Would you like help to quit?” I’ll be honest, when I was younger I was defiant about smoking. Because of the Crohn’s I am very restricted in what I can eat or drink and my attitude was “you won’t take away my fags too!”. It was crazy as smoking was obviously not going to help*.”

Eventually Leigh was advised on a routine hospital visit that there was a local venue she could go to get support from the One You Smokefree team, just round the corner from her house, at the Newington Children’s Centre. “I just thought, “oh well, I’ll give it a go then”. I toddled along and met up with Stefan, who was great. On the first session we just talked about why I smoked, what my triggers were and things like that. On the second appointment I thought; “oh yeah, I get it”, and decided I definitely did want to quit. Stefan talked me through all the options and I decided to use patches and an inhalator to help me.”

It wasn’t all plain sailing though as stress caused by family problems meant that Leigh went back to smoking a few months later. “Things were tough a home with my daughter who has got ADHD and is on the autistic spectrum. I was annoyed with myself for starting smoking again, but I contacted Stefan and said: “can I please come back?” He was really supportive and helped me to quit again, this time for good. I’m feeling so much fitter, I can walk up stairs easily and I don’t get out of breath anymore.”

As well as her health, Leigh has noticed a difference in her bank balance and has been able to treat the family to new furniture and a bright new look in her home. “I’m saving around £250 a month and Gary has stopped too, so we really notice the difference as a family. My gastroenterologist, Dr Hills, was absolutely delighted too, it means she doesn’t need to keep nagging me every time I go for an appointment! I think the service is brilliant, Stefan was absolutely wonderful. I’m never going back!”

Find out more about the One You Smokefree service