Couple compete to get home soonest after both break their hips 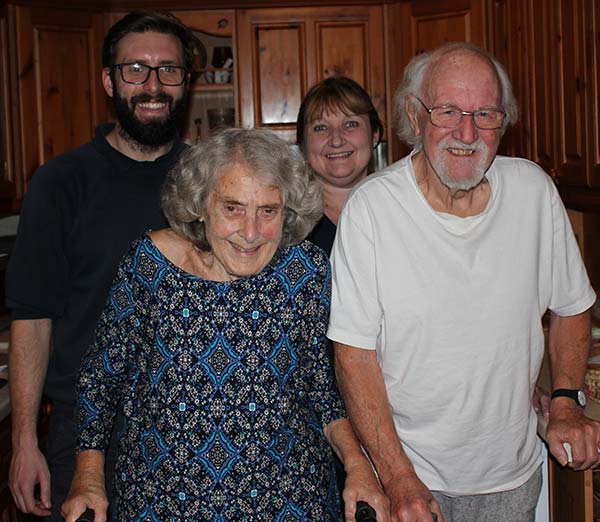 All bets were on when 84-year-old grandmother Pamela Fautley took on her husband and staff in a wager of who would recover faster after the couple broke their hips.

While Brian, 85, was out of hospital and back at his Cranbrook home within just six days of his fall back in December last year, Pam said she was keen to have her independence back just as quickly.

She said: “I hate relying on other people doing things for me. I wanted to get home from hospital as soon as possible. I was lucky, because the team had already put lots of things in place at home to help Brian, like grab rails, which I could make use of.”

Pamela slipped and fell just after finishing dinner in September. She said: “I think I had stretched my slippers because my feet were swollen. I turned round to say something to Brian, stepped on half my slipper and over I went.”

Brian helped Pam up, but when it was clear the pain wasn’t getting better, called their daughter Gillie who lives in the adjoining house. Pam was taken by ambulance to Tunbridge Wells Hospital, at Pembury, where an x-ray revealed the break. Surgeons operated that night, performing a left hemi, to replace part of her thigh bone with a metal ball on a stem.

As part of Home First, the ward team started planning for Pam to get home as soon as she was safe. Pam said: “All the people were incredible, I have no complaints. All the staff knew I was having a bet with Brian to get home sooner than him and they joined in. It made it such fun and the hospital stay was such a pleasant visit. Some of the staff were waiting outside the day I was discharged to see who won.”

Clinical Lead Amanda Lawrance and physiotherapist Ryan Hanney visited Pam within 24 hours of her being discharged to settle her in and assess her at home to see what extra support she needed.

Pam, who has arthritis, was given a walking frame with seat for her to sit on or use as a tray for her tea, a ‘helping hand’ to help her reach down and pick things up from the floor. Ryan started physiotherapy and a range of leg and hip strengthening exercises.

Amanda said: “Pam was walking with a Zimmer frame, we checked she could go in and out of the bathroom okay and she said she wanted to be able to get outside again and she can now.”

So, thanks to the extra support from Home First, who arrived home soonest?

“Apparently Brian tells me it was a dead heat, I was out of hospital within six days too, but I haven’t had that independently verified yet,” Pam smiled.